Skin Abscess and IV Drug Use 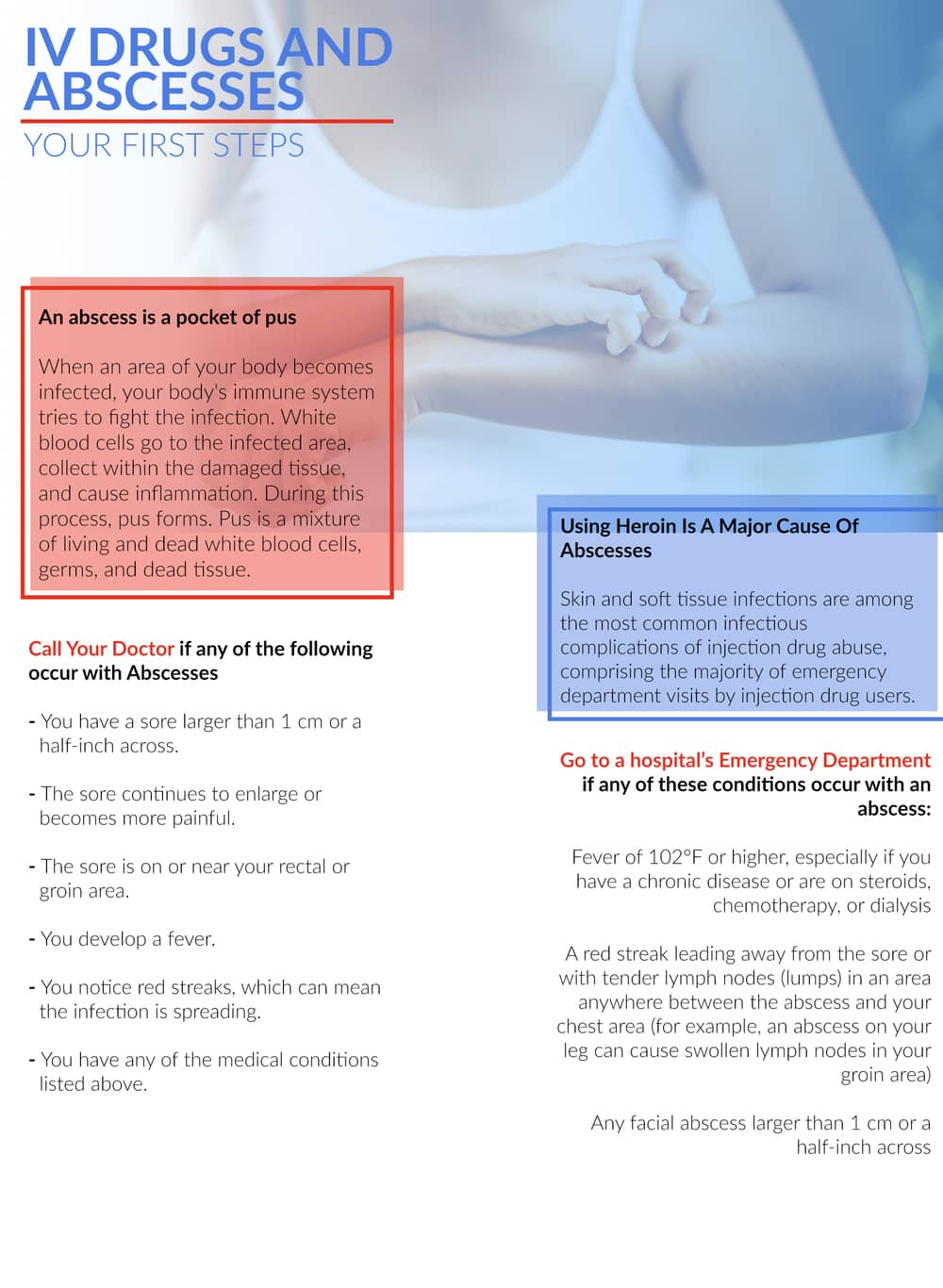 The film “Requiem for a Dream” follows four drug users’ harrowing experiences, including one who loses an arm when a heroin abscess becomes gangrenous.

A cut, a scratch, even an ingrown hair can become an abscess under certain conditions. If treated quickly, it should pose no lasting problems. For IV drug users, however, abscesses can cause lasting physical impairments. They can also be life-threatening.

Treating an abscess from IV drug use can prevent permanent problems. Draining abscesses and taking antibiotics prescribed by health-care professionals can be the simplest form of treatment. But for those with a heroin abscess, the fear of not getting the drug keeps them away from hospitals. Unfortunately, they wait until it is almost too late. The numbers underline the enormous importance of needle exchange sites. These exchange programs can be the first line in harm-reduction efforts. Learn more about abscesses and how to treat them by reaching out to Recovery Hope Treatment at 614-502-6247.

Abscesses From IV Drug Use

Abscesses, especially abscesses from IV drug use, are not pleasant to discuss. However, they are shared, dangerous, and need to be addressed. An abscess is a pocket of pus. When an area on a body becomes infected, the body’s immune system tries to fight it. White blood cells go to the infected area and collect within the damaged tissue causing inflammation; this is when pus forms.

Pus is a mixture of living and dead white blood cells, germs, and dead tissue. Abscesses from heroin contain bacteria, viruses, parasites, dirt, and foreign objects. The type of heroin used also contributes to the seriousness of a drug abscess.

Skin abscesses are easy to detect. They are red, raised, and painful. Abscesses on the surface of the body are easy to spot. But did you know internal organs can develop abscesses as well? For example, abscesses can damage:

In some cases, a heroin abscess can cause serious complications, for instance:

Methicillin-resistant Staphylococcus aureus (MRSA) is another potential complication. MRSA is a drug-resistant strain of a bacterium that commonly causes skin abscesses. While there are alternative antibiotics to treat this strain, they don’t always work.

Are you suffering from health problems because of a heroin abscess? Do you know someone that is? Do not wait. Call us today and we can help you get your health back on track.

The Causes of IV Drug Abscesses

Using dirty needles — either reusing the same needle or sharing needles— causes abscesses from IV drug use. IV drug users who re-use or share needles also risk HIV infection and various forms of hepatitis. Abscesses from heroin are more likely to occur when the drug is injected in muscles or soft tissue, such as the skin.

“They form when an intravenous drug user injects bacteria-infested drugs or when the dirt and grime on the skin are pushed through by the puncture of the syringe,” he writes. “They are nasty and dangerous, and I got them all the time.”

When his veins collapsed, he took to injecting heroin into his muscles. After failed attempts at draining abscesses on his own, he recalls what happened when he finally went to an emergency room for treatment.

The doctor told Rinker he needed surgery and a three-day IV drip of extra-strength antibiotics if he hoped to save his leg.

“When I came to after surgery, I had a hole in my left thigh the size of two grapefruits,” Rinker writes. “The surgeon said he removed over a liter of pus. Two drainage tubes were inserted in my leg above and below the rotten wound. The gaping hole was packed with gauze, which needed changing daily.”

Instead of injecting heroin and other drugs into veins or muscles, sometimes the illicit substances are injected into the skin, which we call skin popping. This method, which is much easier than an intravenous injection, reduces the risk of overdose by ensuring that the body absorbs the drug relatively slowly. Nonetheless, it carries plenty of risks of its own.

An article in the medical journal Cureus looked at the most common complications of skin popping. They include abscesses and cellulitis, a bacterial infection of the skin.

“A study showed the odds of abscess or cellulitis among drug users using skin popping was almost five times the odds of those who used intravenous injection,” according to the article.

The most common bacteria grown in these skin infections are staphylococcus aureus, candida folliculitis (small pus-filled bumps that develop around the hair follicle), botulism, tetanus, and necrotizing fasciitis (also known as flesh-eating disease).

If you or someone you love are suffering from IV drug abscesses do not hesitate. Call us today. We are standing by ready to take your call. Call us today and we will help you start you healthier life.

Abscesses From Different Types of Heroin

Of the various types of heroin on the street, black tar heroin is linked to more extensive vein loss, according to an article in the International Journal of Drug Policy. Black tar heroin is described as sticky like tar or hard like coal and filled with impurities.

“Injecting black tar heroin, with dirty needles, by an inexperienced hand had caused most of my more accessible veins to collapse or harden,” writes Rinker in his Golden Gate Xpress opinion piece.

When this happens, those addicted to heroin begin injecting the drug into their muscles or soft tissue.

“Poor venous access predisposes people who inject drugs to soft tissue injection, which may constitute a causal pathway between black tar heroin injection and abscess formation,” according to the article in the International Journal of Drug Policy.

In a study, researchers compared participants in Sacramento who exclusively used black tar (99 percent) to those in Boston who used powder heroin (96 percent).

“Those who used black tar heroin lost more injection-site veins and were more likely to report abscesses,” the researchers found.

When to Seek Medical Help

Call your doctor or seek other medical help for a drug abscess if any of the following occur:

Go to a hospital’s emergency department if any of these conditions occur with an abscess:

If you need help getting professional treatment, call us. We have experts here at Recovery Hop Treatment and are standing by ready to help. We care about you and your well being. Above all, we want to help you get the treatment that you need today. Start your journey to your new life today.

How to Treat Abscesses

As stated earlier, many users with a drug abscess are reluctant to seek medical help for fear that they may lose access to the drugs. That’s where needle exchanges and mobile care units come in.

The American Osteopathic Association reports on one osteopath who runs the mobile Fresno Free Medical Clinic in Fresno, California. Marc Lasher has been running the clinic on weekends for 20 years and says one of the most common procedures they undertake is draining abscesses.

But perhaps the most important service offered at Lasher’s clinic (and hundreds of others like it) is that it is a non-judgment zone.

“No one is going to beat them over their heads to change their ways,” Lasher says. “We try to get people to reflect by asking questions such as, ‘Are you interested in changing what you’re doing?’ or ‘Do you see where it’s gotten you?’”

For health-care providers who run this type of clinic, their main functions are teaching patients about:

The Foundation for AIDS Research, AMFAR, estimates there are 320 needle exchange programs in 28 states and the District of Columbia. The exchanges were once vilified by conservatives and denied funding from the federal government. Today, more Republican-controlled states are opening or calling for the opening of needle exchange programs. The federal government has also greatly increased funding.

There are three major factors in the growing call for more needle exchanges. The first, of course, is that it helps prevent the spread of deadly viruses and the development of abscesses. Second, the programs save states millions of dollars.

A Centers for Disease Control and Prevention (CDC) cost analysis estimated the savings of expanding access to clean syringes. Through an additional annual U.S. investment of $10 million, there would be a lifetime savings of $75.8 million in inpatient treatment costs.

But perhaps the most important aspect of needle exchange sites is that they encourage drug users to seek help. That’s according to the CDC, which refers to needle exchange programs as Syringe Services Programs (SSP).

“When people who inject drugs use an SSP, they are more likely to enter treatment for substance use disorder and stop injecting than those who don’t use an SSP,” the CDC starts. “New users of SSPs are five times as likely to enter drug treatment as those who don’t use the programs. People who inject drugs and who have used an SSP regularly are nearly three times as likely to report a reduction in injection frequency as those who have never used an SSP.”

Writer Brian Rinker is one of those who went on to seek treatment for his drug use disorder and now says he rarely thinks of the time when he was addicted to heroin.

“Today, the struggles of sober life are challenging,” he writes. “But when I really think about it and compare my life now to the pus-filled one of my junkie past, everything seems pretty good.”

If you are suffering from IV drug abscess please call us right now. We have experts standing by ready to take your call. Let’s work together and get you the help that you need. Call us today and get started on your better life soon.

Rebuilding Relationships in Recovery Losing a Loved One to Addiction