Many people know that using addictive substances during pregnancy can have harmful effects, but they don’t know that those effects can continue on while breastfeeding. Recreational drugs and breastfeeding are advised not to be paired. A majority of the substances dissolve into breastmilk, causing your baby to ingest it. The harmful effects of drug use and breastfeeding are not as substantial as substance use during pregnancy. This doesn’t mean a mother should continue using substances or even start while in the breastfeeding stage. Substances can play a major role in developmental problems for babies. There are ways to safely breastfeed a baby if you are using addictive substances, but the best way to avoid any problems is to avoid using altogether.

If you are a nursing mother who wants to quit addictive substances, call us at (614) 502-6247 today. We want your and your baby to have the brightest future possible. It all starts with a personalized treatment program. Your baby should not have to endure addiction and withdrawals at a young age. Call us today and get the help you deserve.

There are ways to safely breastfeed a baby if you are using addictive substances, but the best way to avoid any problems is to avoid using altogether.

Research-based on the harmful effects of drugs in breastmilk is minimal due to ethical concerns. Putting a child at risk is not something any researcher is willing to do, but there is some information available between recreational drugs and breastfeeding from women who have used it. Women need to have access to the information of the influence different drugs have their breast milk to know if it should be avoided.

All Drugs are Different

Estimating the exact amount of milk, a baby will drink during the day varies, making it hard to calculate how much substance will be ingested. All drugs react differently in the body meaning different amounts will appear in breast milk. This means the damage to a baby cannot be calculated easily. A mother who is going to breastfeed their child should consider not using any substances. If they choose to do so, there are ways to use substances and reduce the damage to your child. This is why using recreational drugs and breastfeeding should never occur.

Avoiding certain substances is easier for some individuals, but no matter the situation, it is advised to quit all substance use while pregnant and breastfeeding. Illicit substances are known to cause major problems in babies such as fatigue, poor mood, poor sleep patterns, poor weight gain, and behavioral problems. The Women’s suggests that mothers who do breastfeed stop using substances immediately. Some of the substances they include are:

If you cannot stop using drugs while breastfeeding, there are ways to avoid transmitting certain chemicals through your breastmilk. The Women’s Royal Hospital recommends avoiding breastfeeding after using drugs. That milk will be contaminated causing health issues in the long term. Often asked, how long do drugs stay in breast milk? There is no definitive answer, but The Women’s Royal Hospital lays out some suggestions.

Listen to the Experts

If heroin or amphetamines were used, it is recommended to express your breast milk within 24 hours. Be sure to dispose of that batch of milk and do not use it to breastfeed your child. Furthermore, it is recommended that you do not breastfeed at all after using drugs. There is a severe risk of transmitting that substance to the baby, but while under the influence you or your child could be harmed. Drug use and breastfeeding can cause severe damage to your baby, resulting in permanent damage as they grow.

Contaminated Breastmilk from Drug Use

Research being conducted in Spain found similar results to that of American research. They found that many drugs can contaminate breastmilk, causing long-term damage to the child. Damage that is done to a child through breastfeeding is similar to the damage caused if substances are used during pregnancy. The American Academy of Pediatrics (AAP) provided a large amount of the data to make these findings.

“The general recommendation is to totally avoid drug abuse while breastfeeding because these substances can pass directly through to the newborn,” Óscar García Algar, co-author of the study and a doctor in the Pediatrics Department at the Hospital del Mar in Barcelona, said.

Doctor Algar described in the official journal Analytical and Bioanalytical Chemistry, smoking while breastfeeding is a leading cause for babies to develop respiratory infections. It is a mixture of nicotine and physical smoke causing these issues for the child. Nicotine patches are just as likely to cause these respiratory infections. Researchers found that for every 240 nanograms of nicotine in breastmilk, the baby will ingest 36 nanograms. Alcohol is also notorious for contaminating breastmilk. There is no exact number for how much alcohol can be found in breastmilk. There is data suggesting that no matter how much alcohol is consumed, a breastfeeding baby is likely to have slower development in motor skills.

Interestingly, the AAP stated that they see alcohol consumption as compatible with breastfeeding. The study conducted by Spanish hospitals says otherwise. Instead, they should consider bottle-feeding their baby. Doctor Algar says that alcohol damage to unborn babies is already known, but “ a recent study by our group showed that 45.7% of the women who came to give birth in our hospital had consumed considerable amounts of alcohol during pregnancy.”

Cannabis, Cocaine, and Other Harmful Drugs

Cannabis has become more popular as it has been legalized at the state level in the United States. This should not be a reason to expose a baby to its harm. Algar and his research team found that cannabis can cause several problems for a breastfeeding child which include sedation, lethargy, fatigue, weakness, and poor appetite. Additionally, the smoke from cannabis is like tobacco and can cause respiratory infections.

Cocaine has been marked as a substance to avoid at all costs. It will cause immediate damage to a breastfeeding baby. The study found that the first signs of toxic breastmilk are when your baby begins trembling and showing signs of extreme irritability. Often times, these symptoms are accompanied by dilated pupils. Similarly, amphetamines also cause irritability and excess crying. This results in many mothers losing the ability to properly care for their child.

Heroin use is another major substance that not only contaminates breastmilk but also causes the baby to become addicted. Heroin dissolved very quickly into breastmilk making it so the baby becomes addicted. This will play a role in long-term damage. Doctor Algar found his research that mothers who do use heroin must let up to two days pass before breastfeeding.

As far as anti-depressants are concerned, little is known about its effects on breastmilk. The AAP state, “these can be a cause for concern during breastfeeding,” but more research needs to be done.

Symptoms of Substance Damage to Babies

The danger of substance abuse during pregnancy will lead to long-term damage. The National Institute on Drug Abuse (NIDA) has found in several pieces of research that drug use while pregnant can cause birth defects like neonatal abstinence syndrome (NAS). This defect is described as a baby going through immediate withdrawal after birth. Since the baby cannot undergo any kind of treatment, they must recover naturally. Even though opioids are the primary cause for NAS, the NIDA has found that alcohol, barbiturates, benzos, and caffeine can cause similar withdrawals in a baby. The length of withdrawal is not exact because the drug used, and the consistency of use will influence from mother to mother. There are several symptoms that indicate a baby undergoing withdrawal.

These are the primary symptoms that the NIDA present in their work. This also relates to mothers involved in drug use and breastfeeding. Children who are breastfed by mothers using substances are more likely to neurologically develop slower. After several tests, the National Library of Medicine found that in mere weeks, children were developing severe symptoms of NAS. Organizations that conduct these studies across the world are urging mothers who use recreational drugs and are breastfeeding to stop as soon as they can. Many recommend at a minimum; mothers spend 90 days away from drugs in order to allow the baby to have the best breastmilk for development.

Where to Go From Here

No matter what stage of pregnancy you are in, avoiding drugs should be at the top of your list. You can avoid developmental troubles in your baby by not using addictive substances during pregnancy. Additionally, do not use recreational drugs while breastfeeding. Some individuals might believe that drugs can’t affect the baby while breastfeeding which is a lie. Substance abuse while breastfeeding can lead to major delays in neurological development and motor skills. By understanding the effect drugs have on breastmilk is only the first step to keeping your baby healthy. If you must use certain drugs that can cause damage, knowing how to properly breastfeed is vital.

Call us today at the number below and start the journey to a substance-free future. The sooner you begin, the happier and healthier your child will be. Recovery is a long process that takes a lot of commitment, but it is worth it to have a baby not starting its life with addiction. Call today and get started with a personalized treatment program. 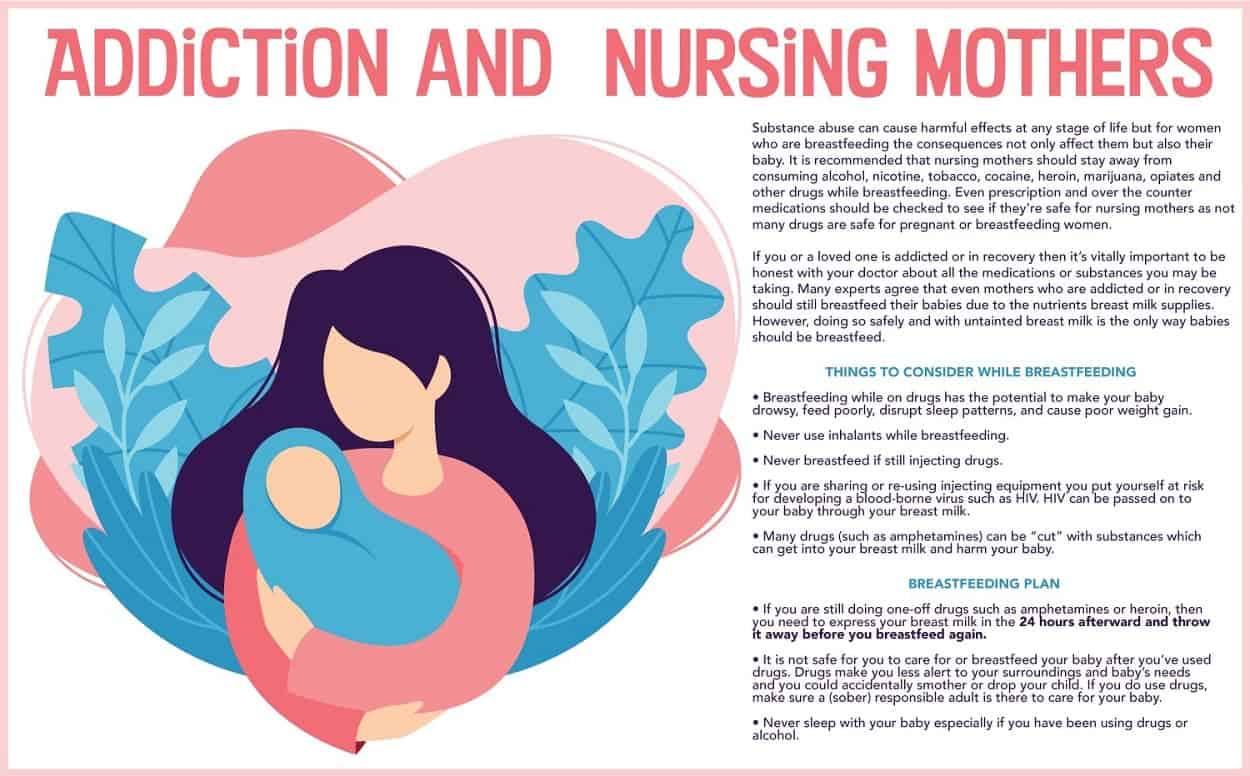 FIND TREATMENT IN Columbus, OH WITH

What is Secondhand Drinking? [Guide] [How to] Address Drinking Problems for College Students

What Are Gateway Drugs?