Sadly, the effects of drug abuse and addiction reach far beyond the individual addiction sufferer. While someone with substance use disorder may wish it would only affect them, that is just not how it works. Addiction is pervasive; it seeps into every aspect of a person’s life, including their relationships. In fact, just one person with an addiction can impact their entire family. But what are the effects of drug abuse on the family? Read on to learn how drugs affect families and relationships.

Addiction can be very difficult to recover from, but fortunately, recovery is possible with the right help. We can guide you to a treatment program that is right for you. Call us at 614-502-6247 to learn about all the options for recovery, including family therapy. Let us make this challenging journey a little easier for you.

Drug abuse not only affects the addict but their family and other relationships in their lives also. Continue reading below for more information about what to do if you or someone you love is suffering from drug abuse.

Oftentimes, the first effect of addiction on a family is a breakdown in communication. Whether the substance abuser is a child or a parent, it can have a ripple effect on the family network. Addiction itself often begins from negative thoughts, mindsets, and moods, and even though the high from a substance appears to counteract this, it will eventually make it all worse. From here, the effects of drug abuse on the family will become increasingly clear.

In any group, communication is key. If drug use hinders these essential patterns of interaction, it can negatively impact the entire family. 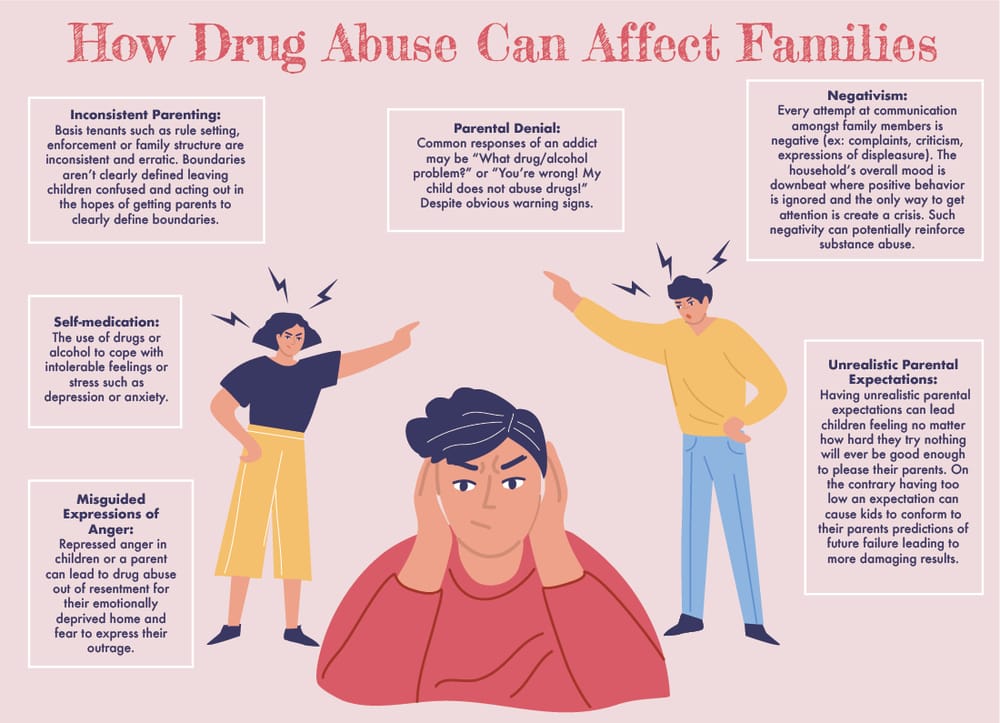 Other Common Effects of Addiction on a Family

Because addiction affects a person’s ability to function, it also affects their social skills and sociability in turn. The consequences of this will resonate throughout a person’s social network, with immediate family getting hit the hardest. However, while negativity in communication is bad enough, it is far from the only answer to how drugs affect families and relationships.

The other common effects of drug abuse on the family include:

Contact us today if you believe someone you care about is suffering from drug abuse. In addition, if you are also suffering from addiction personally then please reach out. Our professionals are here to help you get the treatment that you need.

The Risk of Domestic Violence

While every effect mentioned can have a negative impact on an addiction sufferer and their family, the worst, by far, is domestic violence. The Substance Abuse and Mental Health Services Administration defines domestic violence as “the intentional [use of] emotional, psychological, sexual, or physical force by one family member or intimate partner to control another.”

As we can see, the main motivator for domestic violence is a need for control. To gain it or feel as though you have gained it, acts of domestic violence can take a number of appalling forms, including: verbal, emotional and/or physical intimidation, destruction of possessions and/or property, violence against pets, threats, rape, punching, slapping, kicking, choking, stabbing, shooting, and/or killing. Each or all of these in combination are acts of domestic violence, which can affect any member of the family: spouses, parents, stepparents, children, siblings, grandparents, etc.

Despite the detestable nature of domestic violence, it is an extremely common problem in the United States. One reason for this is that domestic violence often occurs in a vicious cycle. Its presence has an effect on anyone around it and that presence is often linked with substance abuse. According to the Substance Abuse and Mental Health Services Administration, half of the men who commit acts of domestic violence abuse one or more substances. Further, in a survey done by the National Committee to Prevent Child Abuse, it was found that 80% of child abuse cases were associated with the use of drugs and alcohol.

In most instances of domestic violence, substance abuse plays a role. Worse of all, children of abusers often develop substance use disorders themselves later in life, creating a continuing cycle of substance abuse and all the other abuses that come with it.

What Is The Role of Family In Prevention of Drug Abuse?

After examining how drugs affect families and relationships, it is essential to determine the family’s role in the prevention of drug abuse. It isn’t easy, but families can learn to help themselves. They can avoid communication breakdown, instability, mental health problems, domestic violence, and other pitfalls that come with substance abuse.

According to the National Institute on Drug Abuse, parents’ best ways to keep their children from abusing drugs is to create strong relationships with their children. This is the best prevention technique because it fosters a sense of trust and openness in the family unit. Furthermore, adolescents are less likely to experiment or abuse drugs or alcohol if there are no troubles in their home environment.

However, this does not mean parents should treat their children as friends; children still need discipline and supervision to develop correctly. It is best to find a healthy balance between punishment and positive reinforcement.

Life Does Not Always Go According to Plan

Drugs and alcohol can cause problems even in families that seem to be doing everything right. In this instance, it is best to address addictive behavior as early as possible. Postponing an intervention can lead to the mentioned effects on one’s entire family and a wide range of adverse health effects on the person with the substance use disorder.

One of the worst side effects of addictive behavior is how it changes the brain. In engaging in substance abuse and addictive behavior, you essentially rewire your mind to be more addictive. This is especially true in children since their brains are still developing. But, if the family can intervene early enough, the consequences for the individual and the group will be minimal.

Family members can play a huge role in getting treatment for drug addiction. Are you worried a family member of yours might be suffering from an addiction? If so, then call us today. Our experts will help you help them get started on a healthier journey.

How Addiction Affects the Family and How to Recover

Sadly, there are a number of negative impacts when one examines how drugs affect families and relationships, including a breakdown in communication. This can create a number of negative emotions and a negative home environment. Additionally, drug abuse can cause problems with money, child development, parental skills, and even lead to broken families. The ugly prospect of domestic violence also becomes more likely. While substance abuse is not the direct cause, it is often found in both victims and perpetrators of domestic violence.

Thankfully, there is hope. Family prevention is key. In keeping strong family relationships, parents can effectively lower the odds of their child or children abusing substances in the future. But, if drug abuse does occur, early intervention and support can allow that individual to recover quickly and with minimal damage to their health and relationships.

Drug abuse can lead to serious addictive behavior, which can be difficult to overcome in the future. But, sobriety is possible. All it takes is the right help! Give us a call to speak to an addiction specialist today. They can give you guidance on treatment programs and centers that are right for you and your family. Remember, you can overcome.

FIND TREATMENT IN Columbus, OH WITH

Medical Students Addiction Treatment (And Recovery) What Are Gateway Drugs?